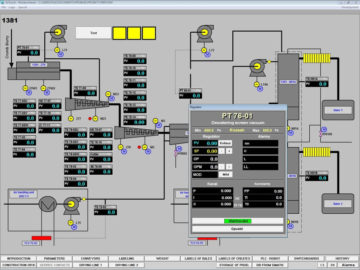 We have many years of experience with programming PLCs Siemens Simatic. We know perfectly all PLCs of the Simatic S7 series (S7-300, S7-400, S7-1200 and the latest S7-1500). We can also manage their predecessors Simatic S5, S7-200 and we know the logic module LOGO! too. We are experienced in all SW versions that have ever been used for their programming, starting with the first STEP 5, through MicroWin, STEP 7 to the latest version of the TIA portal. Of course, we also create application software for control systems of other brands, such as Omron, Mitsubishi, Beckhoff, Schneider Electric, which we have also integrated into our projects several times.

In process visualization, we know the complete portfolio of Siemens, ie Simatic operator panels (OP), Simatic touch panels (TP), mobile panels, as well as HMI panels from other manufacturers. Of course, we also create visualizations on a PC, so-called SCADA systems. We created most of the projects in the development SW Control Web, we can program Simatic WinCC Runtime too.

Even though we know older control systems, we are not lost even in current trends in automation and robotization. We participated in the automation of production processes with robots (Fanuc, Kuka), we got to know the cooperative robot. We have implemented camera sensors (Sick, Keyence) in our projects several times, which use real-time image processing to control the process.

Closely related to the management process is the collection of technological data, which can be stored in a simple data logger for later processing (analysis) or sent in real time to a superior company information system.

This website uses cookies to improve your experience while you navigate through the website. Out of these, the cookies that are categorized as necessary are stored on your browser as they are essential for the working of basic functionalities of the website. We also use third-party cookies that help us analyze and understand how you use this website. These cookies will be stored in your browser only with your consent. You also have the option to opt-out of these cookies. But opting out of some of these cookies may affect your browsing experience.
SAVE & ACCEPT